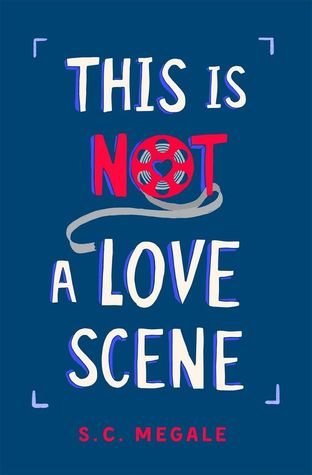 Lights, camera—all Maeve needs is action. But at eighteen, a rare form of muscular dystrophy usually stands in the way of romance. She’s got her friends, her humor, and a passion for filmmaking to keep her focus off consistent rejection…and the hot older guy starring in her senior film project.

Tall, bearded, and always swaying, Cole Stone is everything Maeve can’t be. And she likes it. Between takes, their chemistry is shockingly electric.

Suddenly Maeve gets a taste of typical teenage dating life, but girls in wheelchairs don’t get the hot guy—right? Cole’s attention challenges everything she once believed about her self-image and hopes for love. But figuring this out, both emotionally and physically, won’t be easy for either of them. Maeve must choose between what she needs and what she wants, while Cole has a tendency to avoid decisions altogether. And her failing lungs might not wait for either.

ARC provided by Netgalley in exchange for my honest review. This does not affect my opinion of the book or the content of my review

“I liked being ridden, and offered the chance to pretty much every guy in Video II”

The above quote is the first sentence that starts the book, and if your mind went to the gutter, just keep it there because that’s where this book was the entire time. This is Not A Love Scene is a story about an aspiring director, Maeve, who according to the book summary yearns for romance, however, she feels like her life with a rare form of muscular dystrophy, is the cock block to her greatest romance yet. However, when actor Cole Stone agrees to be cast in her film, she feels like this is her one chance to finally have the romance she’s dreamed of…
I honestly don’t know where to begin with this review that doesn’t make it sound like I am just berating the book–because I don’t want to–but this book rubbed me in all the wrong places. First and foremost, I did not like our main character, Maeve. Self-absorbed and horny is the complete defining traits of our MC. That’s it. I could not relate to her at all, except that we both have a love for film. With little to no self-respect for herself, she lets Cole and others walk over her and treat her like a toy than an actual human being. Not only does Maeve never respect herself, but she shows little to no respect to anyone else–especially those of the female sex. It was almost a repeated point that was driven that Maeve did not like interacting or having anything to do with females.

“Oh, I’m so sorry!” The woman rose and shoved the whole clipboard in my lap.
IF SHE WERE A GUY: God, chivalry. Mmph.
BECAUSE SHE’S NOT: Overkill assistance. Offensive.

The girl hate and sexism was strong in this novel. Repeatedly she sought after the help and advice from the males in the novel and continued to shun any and everything that came from someone with a vagina. Maeve completely disregarded the feelings, and emotions of her friend Mags–almost to the point where I felt like she was condemning Mags for not liking and reciprocating actions that were made towards her like Maeve would have.

With that said, let’s get to the main character trait of our Maeve–horniness. Now I am a lover of erotica and raunchy sex books, but that wasn’t what I signed up for with this book. The only goal Maeve had throughout this entire novel was sex. No matter who it came from (which to me sends out a SUPER wrong message to the target audience), sex was the only thing on Maeve’s mind, every other paragraph it seemed was about sex or how she couldn’t get it because of her disability or how hard it was to get sex, or an innuendo to sex. Literally the book ends with “…I just want to fuck Cole Stone.” I was annoyed with the sex. Lucky for us, Maeve isn’t the only problematic character in this novel–we have our love interest (if you can call him that) Cole Stone, AKA the guy Maeve tries to sleep with throughout the novel, AKA the asshole. One dimensional at best, Cole used Maeve simply for his own pleasure and that was it. That was it.

With so much sex talk, came a lot of phobia–specifical acephobia, and crude/rude jokes about lesbianism. Maeve makes these remarks like in the quote above, to dissolve any and all thought that because she is in a wheelchair doesn’t mean she isn’t capable of attraction and how it’s important that she comes off as normal (as if those who identify as asexual are not normal) and that is why she comes off strong towards men. Maeve then goes on to crack jokes with Mags about how her boy troubles could be wiped clear by wishing to be a lesbian. I felt like her references to asexuality and crude jokes came off very acephobic, homophobic, offensive, and super problematic.

“He’s upset about me partially. And I’m upset about Cole. And both of them like my attention for the wrong reasons. Clearly I just shouldn’t be with men. I wish I were a lesbian”

One of the biggest yikes of this novel, at least for me, was the author’s handling of depression and suicide. As a person who struggles with depression, and has attempted suicide several times in the past–this book made me furious. It made me mad, because it made the supporting character, KC, who was going through this battle and struggle feel like a throw-in, like “oh wouldn’t this be great for our MC to deal with.” I felt like the issue of suicide and depression was brought up, tapped lightly on the head and just left there. The representation was poor–to me at least– and to some extent I felt like how things played out invalidated the supporting character’s struggle– to which it felt like it invalidated my own.

I could say a lot more about how problematic this book was, but I think I will keep it to these main points. As you can see, I did not enjoy this book at all, and because of the lack of a content warning, or trigger warning, I had to take some time away from family and friends and do some heavy self-care. I don’t want to deter anyone, maybe this book has elements that you can relate to and glean from as it is a own voice novel for disability through muscle dystrophy. To which–fantastic! I am glad that you could! However, I do implore you before you pick this one up if you do–to please practice self-care before, during, and after reading.

Huge thank you to Wednesday Books and Netgalley for sending me an ARC for my honest review! Quotations / graphic taken from an uncorrected proof and may change upon final publication.

I am making my way through #KOFAF in prep for #AC

#QOTD why is your go to aisle at your favorite boo