Hard Love by Sara Ney is the latest installment in her Trophy Boyfriends series. The much anticipated addition tells the story of Wallflower, Chandler, and rising NFL football player, Tripp Wallace. Unfortunately, with all the humor and wit that Sara throws us and our Cast of characters–I was left feeling…well underwhelmed. 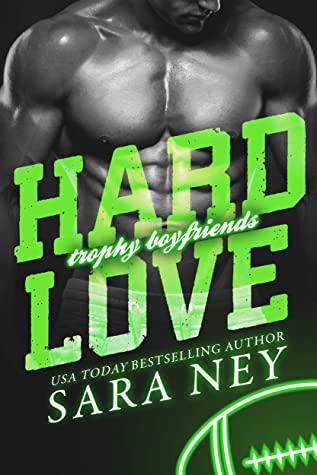 Hard head. Bad attitude. Terrible boyfriend. That’s what my exes have said about me—but I wasn’t serious about any of them, so what do I care what rumors they spread? What I need is to be left alone; by the press, by the paparazzi, and by women.

Too bad I’m about to be surrounded by them for the weekend. My obnoxious, matchmaking brother is getting married, and he’s doing his damndest to find me a wedding date…

That’s what they say about good men—they’re hard to find. Not that when I find one, I’ll be the type he’s looking for; too nice, too ordinary, too boring.

My cousin is getting married, and her fiancé insists on throwing me at his brother. Cold, uncaring professional football player Tripp Wallace would never look twice at a woman like me. Too bad for both of us, I was wrong…

ARC provided by Author in exchange for my honest review. This does not affect my opinion of the book or the content of my review

“The smallest running back on a football field can score the most points. The largest linebacker can miss the easiest block. The most unassuming wallflower can have a drawer full of sex toys.”

This was a struggle bus trying to rate this. On one hand I really want to give it two stars, but on the other hand I did enjoy some bits of the story and some of the elements, and for that I have decided to just keep it at a happy three stars. I was super excited for this story because it felt like something new and fresh from Ney compared to her other novels that have begun to feel repetitive and almost with an unfinished note to them.  Unfortunately this book can be placed along side the others in the repetitive department.

In Hard Love, we are given a douchebag of a hero who is presented as simply misunderstood (I can vibe with this, as misunderstood heroes are my lady jam), and a heroine who is shy and dare I say semi modest? We are set up for greatness, but as the story unfolds our hero turns into an annoying figure with a soft side (maybe?) And our heroine is a complete 180 from the girl the story began with. I think this switch is my biggest problem with the story—Chandler (our heroine) never stayed to who the story set her up as—we were given no hint of this ulterior side to her, but as the story went on and she began to hang out with Tripp more often, Chandler became more like the sassy/snark filled woman from Ney’s other novels rather than this unique individual. And as for Tripp, I could not for the life of me get on board with him. His attitude stunk worse than sewer system. I am all for a grumpy douchebag character, but Tripp was a whole other level of rough that made me cock my head and wonder if he ever listens to the things that come out of his mouth. There were moments, I must admit where I began to lean towards liking him, but by the time I had finished the book, I still was peeved.

This novel, also gives off this unfinished vibe, as I’ve mentioned before; in which we aren’t offered much at the end of the novel apart from a declaration of “I like you”, which is fine if that is your cup of tea! Absolutely nothing wrong with that! I personally, however expected a more rounded HEA, and because of that I felt like the story was cut short and ultimately rushed.

With all of that said though, I do have to mention that Sara Ney brought her signature humor and wit with this novel, and for that alone I gave it the stars that I did. I liked the set up of the romance and the chemistry and banter between Tripp and Chandler (especially via text) is something I thoroughly enjoyed.

Previous Book Reviews In The Series:

Huge thank you to Sara Ney for sending me an ARC for my honest review! Quotations taken from an uncorrected proof and may change upon final publication.

I am making my way through #KOFAF in prep for #AC

#QOTD why is your go to aisle at your favorite boo